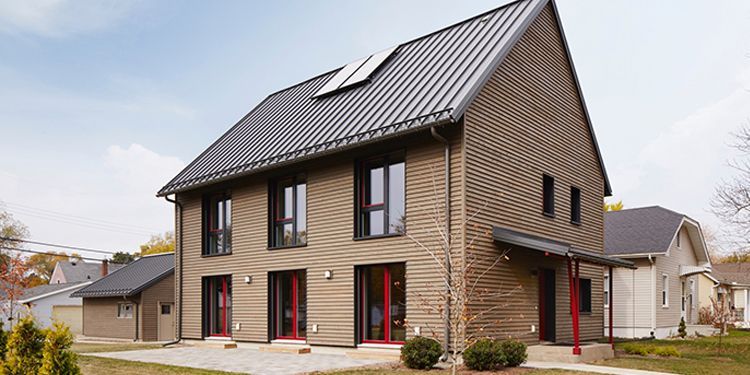 Current housebuilding model storing up problems for the future

Although the UK is falling well short of the Government’s target to build 200,000 new homes a year, the rush by mainstream housebuilders to meet demand whilst maximising profit could, in itself, be storing up problems for the future.

As has been pointed out in a previous government white paper, solving the nation’s housing crisis is not just about building more homes, but making sure these properties are, in the words of the paper; ‘of the type people want to live in’.

Furthermore, according to one of our key speakers at the forthcoming Eco Connect London event, a major obstacle in the way of solving the crisis is the current ‘speculative’ housebuilding model.

This encourages developers to buy land competitively with one another years before homes are built. In an attempt to reduce the risks created by such a major upfront investment, the land-owning developers cannot build and sell too quickly, or risk undermining prices in their own market and making a loss on their initial land investment.

This has proved successful in the past, from the ‘model’ villages for factory workers at Bourneville and New Lanark; to the red bricks of the Peabody and Guinness estates.

Many Victorian and Georgian terraces in our major cities, along with the ‘Garden’ cities of Letchworth and Welwyn, are also the result of an approach that’s shown that the UK can lead the world when it comes to providing places to live that are both affordable and high quality.

Shelter believes that achieving this requires land market reform combined with targeted public investment. In essence, ‘Civic’ housebuilding starts by bringing in land at a lower, fairer cost and channels competition between firms into raising the quality and affordability of homes.

In the past, governments have also achieved volume growth either through deregulation, such as in 1930’s London, or through public sector intervention, 1960’s council housing for example, but neither approach presents a viable solution to our current housing crisis.

Whilst forcing housebuilders to develop more quickly through deregulating the planning system is politically infeasible, investment through local councils alone risks inflating land prices, creating a cost spiral, and can lead to poor quality homes when costs are squeezed.

Equally, spending more public money subsidising home buyers in a constrained market will only lead to price inflation and, according to the charity’s figures, new build homes are already unaffordable for 84% of families in rented accommodation across England, even with the Government’s Help to Buy scheme. This model itself exacerbates the problem as it relies on keeping house prices up to recoup the high cost of land.

However, the ‘Civic’ approach has proved a successful model of housebuilding throughout our history, but never at sufficient scale to rival speculative building.

To achieve this, Lloyd claims it will be necessary for the creation of a public agency with the teeth to see through the market reform and the power to overcome planning objections.

Although some critics claim this approach is simply a re-hash of outmoded socialism, it’s hard to argue against Shelter’s basic premise that the goal of building homes is to benefit the people who will live with them and the communities they inhabit. That’s not to say that commercial motives cannot play a part – it simply means that short-term profit cannot be allowed to completely override wider public good in determining what gets built.

Of course, new homes can be well built, perform well, and offer benefits in health and wellbeing, comfort, energy efficiency and reduced running costs, but all too often the consumer experience is very different.

From poor aftersales service, extortionate leaseholds and cramped living space the market is often delivering homes that are simply not fit for purpose. This has the potential to generate a legacy of problems for the future, with major implications across a wide range of issues, from climate change to social care.

A packed programme of speakers will be tackling many of these concerns at Eco Connect, which combines the Association of Environment Conscious Building (AECB) National Conference and the International Refurbishment Symposium.

At the event on September 15, Toby Lloyd will be joined by Paula Higgins, Founder and Chief Executive of the consumer organisation Homeowners Alliance, and Bevan Jones, Managing Director of Sustainable Homes.

We’re also delighted to welcome Dr Howard Porter, the Chair of the government’s ‘Each Home Counts’ review of the domestic retrofit sector. During the International Refurbishment Symposium, he’ll be joining a ‘Big Debate’ session before delivering the closing remarks.

You can view a full list of speakers, together with topics up for discussion, at www.ecoconnect.co.uk, and it’s not too late to book your place and have a say in shaping the future of the housebuilding and retrofit sectors.

Eco Connect tickets cost £199 and include admission to the conference, symposium and an exhibition featuring more than 25 partner organisations at IET London: Savoy Place.